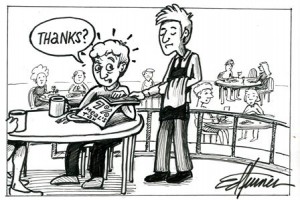 Northborough – Just like surrounding towns, Northborough is struggling to raise tax revenue without raising property tax rates. At a recent Board of Selectmen meeting, Town Administrator John Coderre suggested instituting the increase in hotel and meals tax that the state approved as an option several years ago. At that time, some nearby municipalities adopted the meal tax increase from 6.25 to 7 percent, along with a hotel tax increase from 4 to 6 percent.

If Northborough voters approve the proposal at Town Meeting, officials believe those new taxes would raise enough funds to offset the anticipated fiscal year 2014 tax increase by $35 for the average taxpayer.