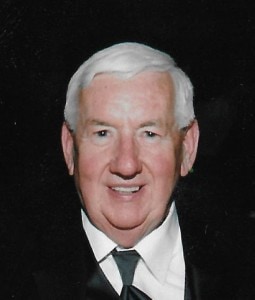 Northborough – David F. O’Hara passed away at home surrounded by his loving family Saturday, Dec. 5, 2015, at the age of 76.

He leaves his wife of 48 years, Kathryn (De Stefano) O’Hara; his two daughters, Karen Bunton and her longtime companion Scott Thompson of Shrewsbury and Erin Page and her husband Tadd of Northborough; and his son, David J. “DJ” O’Hara and his wife Allison of Westborough. He was lovingly known as Pops to his grandchildren, Taylor, Ashley and Kendall of Northborough; Ryan, Sean and Emma of Shrewsbury; and Mia and Jack of Westborough.

Born and raised in Worcester, he was the son of the late George and Alice (Rittburg) O’Hara, and the cherished nephew of the late Alice (O’Hara) and Alfred Lawlor. He graduated from St. John’s High School in 1957, and proudly served his country in the U.S. Army.

David retired as parts manager from Colony Truck Center, Warwick, R.I. in 2006. His long career in this field included positions at Rodman Truck Center and Harr Ford.  David was the recipient of numerous national awards and considered to be one of the most awarded in his profession.

Please omit flowers. Instead, donations in David’s memory may be made to St. John’s Scholarship Fund, 378 Main St., Shrewsbury, MA 01545.