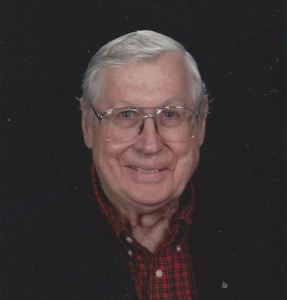 Westborough – Charles A. “Charlie” Flood, 87, longtime resident of Westborough, died Thursday, Dec. 31, 2015, surrounded by his loving family after a long battle with pancreatic cancer.  He is now reunited with his beloved Janet, who predeceased him in 2009.

Charlie was born in Spring Lake, N.J., son of Joseph B. and Edna (Bowen) Flood.  He was raised in Manasquan and educated in their public schools. He is a graduate of Maryville College in Tennessee. He served in the U.S. Army Medical Service Corps during the Korean War. While serving at the Murphy Army Hospital, he had a blind date with a young kindergarten teacher whom he married and shared 55 wonderful years with.

Charlie and Janet settled in Westborough in 1959 when he joined the Worcester Foundation for Experimental Biology in Shrewsbury as a research associate. He then worked at the UMass Medical School as a steroid chromatographer in the Endocrine field. He co-authored several papers before retiring in 1993.

Charlie was a longtime member of the Congregational Church of Westborough and loyal member of the chancel choir. He served on the Music Committee and the Men’s Lunch Bunch. He was a member, Past Master and Secretary Emeritus of Siloam Lodge A.E. & A.M. of Westborough. He was a member of the York Rite Bodies of Milford and Alethea Grotto of Worcester. He was an assistant Scoutmaster of Troop 100 in the 1970s. He served during the 50th anniversary of the Troop, and he and Scoutmaster Richard Clapp were instrumental in changing Troop 1 to Troop 100 in recognition of Westborough being the 100th town incorporated in Massachusetts.

The family would like to thank Lynn, Scott, Zachary Webster and Beverly Lees for their devoted loving care as neighbors and good friends; the Westborough Senior Center; the VNA Hospice Service (especially Nancy, Sandy and Cha-Cha); his dear friend, Myra Kinnaman; and Dr. Robert Klugman and staff.

Calling hours will be Tuesday, Jan. 5, from 4-7 p.m., at the David A. Pickering Westborough Funeral Home, 62 West Main St., Westborough. A Masonic service will be conducted at 6:45 p.m. A celebration of his life will be held Wednesday, Jan. 6, at 11 a.m., at the Congregational Church of Westborough, 57 W. Main St. Westborough.  Burial in Pine Grove Cemetery will be private.

In lieu of flowers, contributions can be made to the Westborough Senior Center, 4 Rogers Rd., Westborough, MA 01581.