Shrewsbury – When shoppers visit the new Whole Foods Market located in the Lakeway Commons, which officially opened Jan. 30, they will not only find a 50,000 square foot store that will fulfill just about every culinary desire. They will also find a store that pays homage to the iconic Spag’s store, that was previously located on the spot from 1934-2004, and its legendary owner, Anthony “Spag” Borgatti.

That is by design, according to Bill Butcher, a marketing and community liaison representative with the company.

“This is the 41st store in New England,” he said. “But no two stores are the same. We really try to reflect and celebrate the community the store is in.”

For decades, Borgatti ran the store which featured a wide array of household goods. He was also beloved for his philanthropy. After the store closed, the building and surrounding property went through several other incarnations until being bought by Grossman Development LLC in 2014. Whole Foods is now an anchor store in the mixed-use development which features businesses and retail stores, restaurants, and apartments and townhouses.

At the grand opening, Lt. Gov. Karyn Polito shared her excitement about the new store.

“I am proud and honored we are here in Shrewsbury to be the host for Whole Foods newest store. I stand here with Mary Borgatti, Spag’s sister-in-law, and I am the granddaughter of Bob Lutz, who was Spag’s brother-in-law.” She said. “I am so proud to have been a former employee of Spag’s and what I think about today is what was embraced by Spag’s many years ago. He hired locally and he did business with local businesses, he gave back to the community and all of those values are embraced by Whole Foods in this store today.”

“We are just thrilled to be here today after four and a half years of planning and we are thrilled that not only has Whole Foods chosen Shrewsbury and the Lakeway Commons and to come to this area, but they also recognize the importance in honoring the legacy of Spag’s and what it means to the community,” he said. “We look forward to many, many years of Whole Foods success here.”

It’s not hard to notice the Spag’s influence in the new store. As soon as shoppers walk through the main entrance they will see the huge Spag’s sign that once hung outside the former store. Borgatti was known for wearing a cowboy hat – an oversize one is now hanging on a wall in the produce area. His wife, Olive, is also fondly remembered with the flower shop which has been named in her honor. Other Spag’s memorabilia are sprinkled throughout the store.

Customers can start off their visit at the Allegro Coffee Bar which will also have freshly made donuts produced throughout the day.

The store features a vast selection of alcohol, including 1,400 wines, 400 types of beer, including a variety of local craft, and 300 types of spirits.

Throughout the store, customers can also find a cheese department that features local and imported varieties, seafood that is sourced from Pigeon Grove, Gloucester, lamb and pork from New England farmers, and paleo desserts from the White Lion Bakery in Mashpee.

While there are items that might be a bit pricier than others, there are plenty of bargains to be had as well, Butcher said, especially with the store’s 365 brand.

The store’s new partnership with Amazon has also helped reduce some prices, as well, Butcher added.

There are also plenty of options should customers decide they would rather purchase a tasty and healthy prepared item, such as salads, sushi, rotisserie chicken, and much more.

If they like, they can also eat their purchases on the premises in the upstairs Borgatti Bar which will feature snacks and sides, sandwiches and salads complimented by a curated wine, beer and cocktail selection. The comfortable area seats approximately 100.

And in yet one more tribute to Spag’s, the store gave away $20 gift cards to the first 100 shoppers who come to the store wearing a cowboy hat. 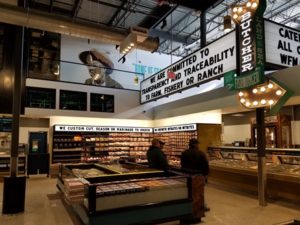 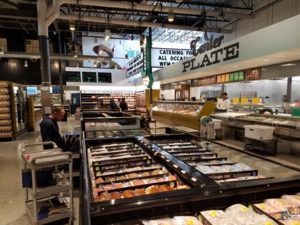 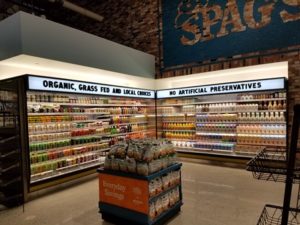 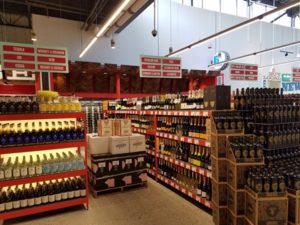 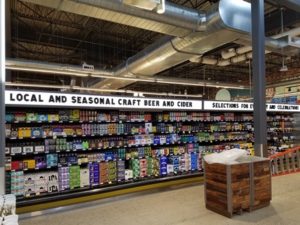