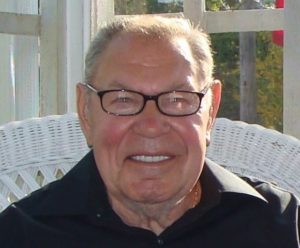 Dick was born and raised in Marlborough, the son of the late William and Rose Garceau. He graduated from Marlborough High School where he played both football and baseball. After graduation, he enlisted in the United States Army and proudly served his country from 1954 until 1956 in the Korean War. Upon his return from service, he went on to earn his associate’s degree from Becker College and married his lifelong love, Helen.

Dick started his own business, Dick Garceau Insurance, where he enjoyed working for over 50 years as an insurance broker.

Dick enjoyed boxing, bowling and watching his two favorite sports teams, the Red Sox and Patriots. Most of all, he loved to go deep sea fishing. In addition to deep sea fishing, he also owned a saltwater aquarium that he enjoyed.

Dick loved to entertain and was the “life of the party” He loved the sounds of Louie Armstrong among many others and would sing to his heart’s content. Dick worked very hard on his backyard and loved to entertain in it! He enjoyed having family and friends over to the pool where he would host pool parties and barbecues. He was bigger than life! He was a member of the Lions Club of Marlborough and the Marlborough Amvets.

In addition to his wife, Helen, Dick is also survived by his three children, Michelle (Garceau) St. Michael from Berlin, Richard Garceau and his partner Thomas Nortz of Centerville, and Kathleen (Garceau) Rhodes and her husband Mark of Berlin; three grandchildren, Krystle Rowe, Mark Rhodes Jr., and Austin Rhodes. Dick also has threenieces, Cathy, Susan and Nancy Bombard, all from Berlin. He was predeceased by his sister, Doris Bombard.

Calling hours for immediate friends and family will be held Friday, Feb. 2, from 4-6 p.m., at TIGHE HAMILTON REGIONAL FUNERAL HOME, 50 Central St., Hudson. A celebration of Dick’s life will be held at the funeral home Saturday, Feb. 3, at 10 a.m. Burial will follow in North Cemetery, Berlin.