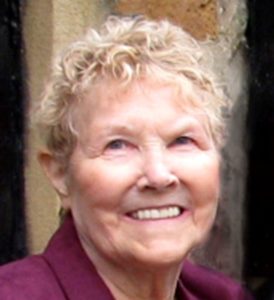 Westborough – Audrey M. O’Toole, 83, of Westborough and formerly of Sandwich, passed away peacefully Feb. 20, 2019, surrounded by her loving family. She was married to her husband of 43 years, William F. O’Toole, before his death in 1999.

Born in Acton, England on May 17, 1935, she was a daughter of the late Isaac and Elsie (Sewell) Teasdale. She was raised and educated in Ruislip, England, and worked as a shopkeeper in London before moving to the U.S. after marrying Bill. Together they worked and raised their family in Quincy, before moving to Sandwich in 1978.

Prior to retiring to Canton and then to the Highlands in Westborough, Audrey owned The Brown Jug Antiques in Sandwich for many years, and loved traveling with Bill to find hidden treasures. She also enjoyed reading, gardening, sitting by the ocean and traveling back to her beloved home in England. She cherished the time spent with family and friends most of all.

She is survived by her four children, William J. O’Toole and his wife Carolyn of Quincy, Lynn M. St. Germain and her husband Todd of Holden, Michael S. O’Toole of Cambridge, and Elizabeth A. Graham and her husband Peter of Northampton; eight grandchildren, Will (Lindsay), Kerin, Jessica (Mark), Kristin, Emilee, Hayley, Max and Jackson; two great-grandchildren, Eloise and Maxwell; her sister, Hazel Edwards and her husband Eddie; and a large extended family. Audrey was predeceased by her brother, Alan Teasdale.

She will be remembered Saturday, Feb. 23 at the Pickering and Son Westborough Funeral Home, 62 West Main St., Westborough. The calling hour takes place from 3-4 p.m., followed by a memorial service at 4 p.m.

In lieu of flowers, donations in her memory may be sent to Heritage Museums and Gardens, 67 Grove St., Sandwich, MA 02563 or via www.heritagemuseumsandgardens.org/give.