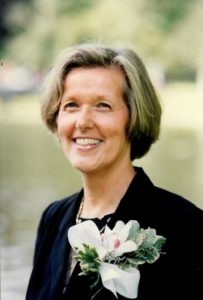 Westborough – Erika (Neumann) Doyle, passed away in Westborough peacefully on Good Friday, April 19, 2019 following a long courageous battle with Alzheimer’s disease. She was 74 years old. A longtime resident of Westborough, she was the wife of John F. Doyle for 49 years.

She was born Aug. 31, 1944 in Breslau, Germany, and was the daughter of the late Kurt and Luise (Rautenberg) Neumann. Shortly after her birth, the family was forced to flee their home in Breslau to escape the invading Soviet Forces who eventually destroyed her home town. The family eventually settled in Ulm, West Germany shortly after WWII where Erika was raised and completed her studies. It was during these years that Erika studied Traditional Russian Ballet under Russian tutelage and became an accomplished ballerina.

Erika worked in Ulm and also spent two years living and working in Haifa, Israel before emigrating to the Boston area in 1966 where her older married sister lived with her husband and children. By this time, Erika was fluent in three languages. She worked at the Federal Reserve Bank in Boston and through a work colleague, met her husband John in Boston. He survives her as do their three children, Lauren Doyle, John and his wife Lisa Beth (Cronen) Doyle, Jim Doyle and his wife Theresa Champ, grandson Henry J. Doyle and step grandson Jordan Champ. Erika was predeceased by her sister Edith (Neumann) Campbell and spouse Bob Campbell. Surviving are her two sisters in law, their spouses, cousins and many nieces and nephews both here and abroad.

Erika was a longtime medical assistant at Fallon Clinic in Westborough and enjoyed her time there with colleagues and local patients.

While raising her children and working full time, Erika traded in her pointe ballet slippers for running shoes and became a competitive road runner, medaling in many area 10k races and she also competed in most of the well-known Central and Eastern Mass 10k races. She also ran the Boston Marathon. Her favorite race was Charlie’s 10k in Worcester. But perhaps the ultimate enjoyment for her was often running at Ogunquit Beach in Main e at low tide, sometimes accompanied by her husband or one of her children. She was most gracious to slow her pace for this company.

Ogunquit Beach was the family’s favorite vacation destination for many years. The family also spent some wonderful winters xc skiing in Vermont, New Hampshire and Lake Placid, N.Y. and over the years the family enjoyed attending many concert s and Broadway musicals in the Boston area.

Erika was a gentle, kind and soft-spoken woman, easy to please, often understated, yet deceptively talented and much loved and respected by all who knew her. She was most comfort able in the company of animals and nature, especially here in New England. She also had a passion for the plight of the Native Americans of the Southwest and she and John spent time in Arizona studying their tribal cultures.

At home Erika was happy relaxing on the couch, knitting many sweaters, mittens and beautiful blankets for family and friends while in the company of one of the family dogs beside her with its head on her lap. She and the entire family developed a special bond with all their beloved pets over the years. There always seemed to be a Labrador Retriever in their yard or in the house on the couch.

Erika loved her family, was proud of their accomplishments and she will forever be an irreplaceable wife, mother, grandmother and friend.

Her family is especially grateful for the loving care she received at Whitney Place and Beaumont Nursing Home in Westborough from the CNAs, medical staff and Hospice Care. They do thankless deeds every day.

There will be no calling hours. Private services in Boston will be held at the convenience of the family.