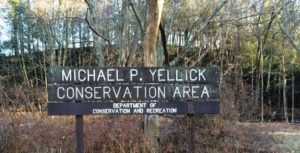 Northborough – A proposed dog park that would be funded by private contributions and a matching grant from the state’s Department of Conservation and Recreation (DCR) might not happen after all, if a group opposed to the project gets its way. Members of that group attended the Board of Selectmen’s Oct. 22 meeting to share their concerns.

The town had worked collaboratively several years ago with a citizen group to identify appropriate public land upon which to site a dog park, but was unable to find a suitable location.  The one site that appeared to be an excellent match for a dog park was the Michael P. Yellick Conservation Area on Hudson Street. However, DCR policy at the time prohibited such uses.

Then, when the DCR loosened its restrictions, the supporters were able to go ahead with plans for this site. They first needed to raise $16,300 to receive a DCR grant through the Partnership Matching Funds Program, which it did in September, thanks in part to a large donation from the Del Re family.

But then opposition to the proposed park started, led in part by Alick Yellick, who lives near the park. The conservation area is named for his brother, Michael P. Yellick.

In an email sent to a number of town and state officials, Yellick said, “Land that was supposed to protect native plants, wildlife and their habitat along with the Assabet River will now be destroyed. Dog waste, fluids from vehicles, and trash will ultimately end up littering the land and river. The presence of barking dogs and loud vehicles will scare away the wildlife that call the conservation land home.”

At the BOS meeting, Selectman Julianne Hirsh said that she, like the other board members, had received many emails and phone calls from residents opposed to the new park. One particular issue of concern, she said, was that the park would allow dog walkers to bring up to eight dogs to the property.

She asked if it were possible for the town to have a new meeting with DCR so that concerns of residents could be addressed before any further work on the park was done.

Town Administrator John Coderre said the next step would actually be for DCR to assign a manager to  the project, but until then, nothing really else could be done. A public meeting would be held in the future, he added, but to hold one before the manager was assigned would be premature.

Yellick also spoke at the meeting, where he thanked the selectmen for taking the time to listen to the residents’ concerns.

“The intent was good,” he said of the idea for a park, “but handled wrong.”