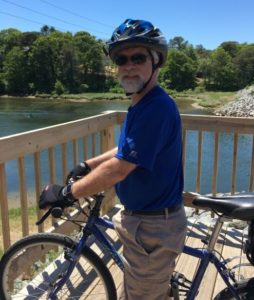 Southborough – Robert H. Titus passed away on December 9, 2019 at age 62, surrounded by his beloved family. He was the cherished husband of Ilene (Wanat) Titus.

Robert was born to the late William S. Titus and Lucille Titus (Denton) of Butler, PA.

Robert was employed by Raytheon as a Design Engineer and by Digital Equipment Corporation for Circuit Design and Architecture until moving on to Intel Corporation in 1998 where he worked on various design projects and as a Technical Account Manager until his retirement in 2015.

Robert had many hobbies and passions including Downhill Skiing, Biking, Hiking, Camping, SCUBA, Auto Mechanics, and Carpentry.  He enjoyed skiing and hiking trips to Vermont, New Hampshire, and Maine with his family and friends.  His favorite biking trails were on Cape Cod where he and his family spent many summers biking, kayaking, and enjoying the beautiful views and wineries.  He camped with his family several times on Mount Desert Island and around the New York State Finger Lakes.  He enjoyed biking the carriage roads of Acadia National Park.  Robert participated in the Wachusett Night Race League for DIGITAL Equipment Corporation Ski Club, and raced in the New Hampshire Eastern Inter-Club League as a member of the ACE Ski and Board Club where he was also Benefits co-chair along with his wife Ilene for over a decade.  Robert was Scoutmaster of Troop 92 Southborough from 1999 to 2002 and spent much of his free time volunteering including as Chairman of the Southborough Affordable Housing Partnership Committee.

Visiting hours will be held at the Morris Funeral Home, 40 Main Street, Southborough on Sunday, December 15, from Noon to 1:30 p.m., with a memorial service immediately following the visitation.

To leave words of condolence to the family, please visit, www.morrisSouthboroughfuneral.com.