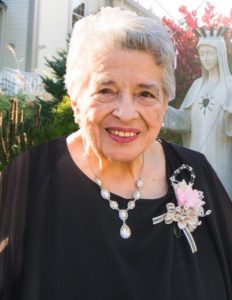 Southborough – Lidia A. (Tebaldi) Kiley, 92, a lifelong resident of Southborough,  passed away on Sunday, February 9, 2020 at St. Vincent’s Hospital in Worcester after a period of declining health. She was the wife of the late Robert M. Kiley, who died in 2008.

Born in Southborough, she was the daughter of the late Terenzio and Augusta (Facondini) Tabaldi.

Lidia was a 1945 graduate of the former Peter’s High School in Southborough and at Dennison Manufacturing Company in Framingham before she married Bob.  After her marriage Lidia was a stay at home Mom and enjoyed being a homemaker. During certain times of the year, she worked for many years for the town of Southborough knocking on doors to gather information for the census before they were mailed to individual addresses and she also worked at the polls during town, state and national elections. Lidia was a member of St Matthew Church where she sang in the choir and Southborough Catholic Women’s Club.

She is survived by her loving and adoring family and they are, her children, John Kiley of Berlin; Terry Kiley of Southborough; Mary T. Peterson and her husband Eric of Tynsborough;  her siblings, Rena Blais of Framingham; Wilma Sauders of Ohio; Gino Tebaldi and his wife Mary of Hudson; 4 grandchildren, Lauren Giroux and her husband Kyle, Carl and Brett Peterson; Samantha Kiley; and many nieces and nephews.