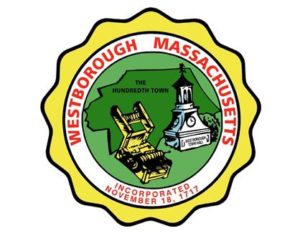 Westborough – In response to public outcry that gained traction on social media over the weekend, the Board of Selectmen decided at their meeting Tuesday night to hold a public hearing in July regarding changing the town seal.

It was noted that since the discussion item had appeared on the agenda, numerous emails had been received by Town Manager Kristi William’s office, as well as selectmen themselves, on the subject. The selectmen noted that the communications on the whole, whether they were in support or opposition to a proposed change, were thoughtful, respectful and meaningful.

Resident Charlene Tebo approached the board with a presentation regarding the seal. She provided some background on the cotton gin, which appears on the seal and was invented by Westborough resident Eli Whitney in 1794. She said the invention revolutionized the slave trade due to increased productivity requiring larger crops and increased labor force, and said the cotton gin represents a sign of oppression.

“It’s really a matter of what is the image Westborough wants to show proudly on their seal to represent the community as a whole,” Tebo said. “Do we want to continue to display a device that contributed to slavery within the US, both in our community and as portrayed to the outside community as well? I feel like this is a time, with everything going on, we have to reflect on whether we are proud of the inventor or the invention.”

Tebo said the seal was created by students of the community for 250th birthday of the town, noting that the year was 1967, the latter end of civil rights movements.

“I’m not making any assumptions to anyone’s stance on segregation at the time, but it is important to understand racial dynamics at that time and understand how education was being presented,” she said.

Tebo said she has felt passionately about this for some time, and that she spoke about it at the town’s 300th birthday celebrations when the cotton gin was displayed prominently. But when she spoke up about it, she said, she was met with a negative response.

“With current climate, I brought it up again and it was received much differently,” she said. “I think this is a time to reflect upon the message our seal sends to people of color. Is it a message of inclusivity to the people of Westborough?”

She asked people to reflect on the impact of the seal being displayed on uniforms, town vehicles and town buildings. She asked them to consider the message that can send and the impact that can have on the relationship between local law enforcement officials and residents of community. So far, she has reached out to have dialogue with Police Chief Jeffrey Lourie and Sgt. Michael Daniels.

“When I first took over, I wasn’t a big fan of the patch,” Lourie said. “Now that that this has been brought up, I’m not objecting to upgrading our patch. I had very productive conversation with [Tebo]. I’ve seen the social media; we need to come together now and cannot take these things on the personal level. I think it’s something we should discuss.”

Tebo also presented some research about how self image and public image can impact the black community, citing a study that shows positive racial identity in black children is connected self esteem and contributes to academic success as well as positive emotional functioning.

Williams said any change of the town seal will need a Town Meeting vote, and that a new seal would have to be presented for consideration at that time as well. Tebo said lots of ideas for the new seal have been suggested on social media, including celebrating Eli Whitney in another manner (like as a father of American technology), the fact that Westborough is the 100th town in the commonwealth, celebrating various athletes from Westborough, focusing on farming, celebrating the Nourse family as abolitionists, a landscape and celebrating Sleigh manufacturing. Selectman Leigh Emery asked that a celebration of Nipmuc Nation be added to the list.

Williams recommended having the diversity and inclusion committee create the process of approving new town seal.

All of the selectmen were overwhelmingly in support of considering a new town seal.

“This is deeply personal for me because I grew up in a land where we’ve been killing each other over cast and creed for over a millennium, and are still killing each other,” Selectman Syed Hashmi said. “We have within each of us the power of a thousand suns to heal each other and this moment calls for that.”

Emery said there needs to be more conversation in a larger forum.

“I think we are having an unprecedented, culturally-diverse response to this,” she said.

Selectman Ian Johnson said he thought this was a great opportunity to get community involvement and discussion on an issue.

“People are energized,” he said. “Let’s capitalize on that. But I think we have to be thoughtful about these changes. They don’t happen overnight, and folks need to be tolerant over that.”

Selectmen Vice Chair Allen Edinberg said two years ago, the town created a vision and mission statement as part of it’s strategic plan, and that a new seal fits into this.
“The concept of engagement, welcoming, inclusion is embedded of what we inspire to be,” he said. “This sense of inclusion and community is part of our mission statement as well. The question I ask myself is, ‘Does our current town seal speak to that mission and what we aspire to be?’ and I’m not sure you can say yes to that and personally I don’t believe it is.”

Selectman Chair Shelby Marshall said she was humbled by the presentation and the dialogue shared.

“These times have made me much more self-reflective regardless of the views being presented,” she said. “I think we do ourselves a favor by listening to new ideas. I am continually struck by the positive nature of so many people saying the town seal doesn’t represent Westborough’s total history, and by changing the seal we don’t diminish the history.”

The financial impact of changing the seal on uniforms, town vehicles, stationary, etc. during already challenging fiscal times was brought up as an issue that will have to be considered if the seal is changed.

The board decided to organize a public hearing sometime in July. They also pointed out that there are three open positions on the diversity and inclusion committee if anyone would be interested in filling them.