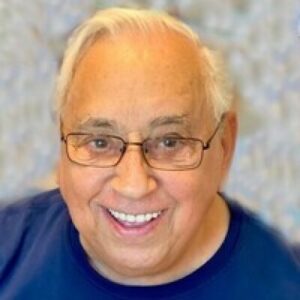 Bob was born in Worcester and raised in Shrewsbury, one of eight children of Michael J. Vuona Sr. and Lucy “Sally” (Abasciano) Vuona. He graduated from Shrewsbury High School, then joined the U.S Marine Corps serving his country proudly. After discharge and return to Shrewsbury, Bob married his love, Theresa L. Simon. They then began a 59-year marriage of love, faith, family, and dedication, raising their family in Shrewsbury before moving to California in 1984. Bob worked to support his family by caring for customers in the restaurant industry.

Bob was a member of the Knights of Columbus since 1963 and proudly became a 4th degree Knight having the special honor of holding the title, “Sir Knight.”  He was a devoted and beloved member of Holy Innocents Church. He enjoyed all sports, especially Bowling, Bocce, Golf, Cornhole and Horseshoes, but particularly loved watching the Red Sox and Patriots.  As a member of a large Italian family, Bob always lived a life of having family around him.  The holidays, special celebrations, and moments he could be with them were always treasured.

A period of calling hours will be held Saturday, June 18th from 9:30 am to 11:00 am follow by a prayer service in the MERCADANTE FUNERAL HOME &  CHAPEL, 370 Plantation Street. Burial with U.S. Marine Corps honors will follow at Mt. View Cemetery, Shrewsbury.