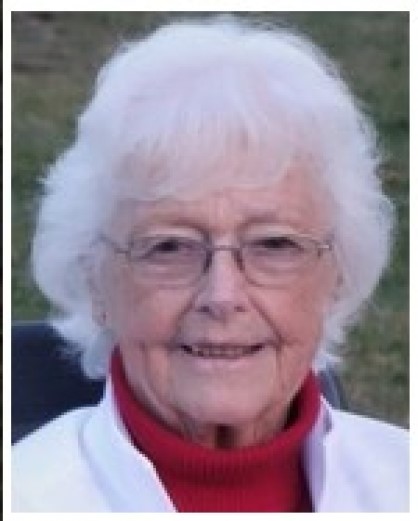 Northborough – It is with a blend of sadness and joy that we announce the death of Eileen M. Tupper, nee Costello, of Northborough, Massachusetts. It is sad because she will be greatly missed by all those her knew her and joyful because she is finally at rest with her husband Arthur L. Tupper in the great hereafter. On September 14, 2022 Eileen left this world at 89 years, in the quiet with her daughter and caregiver Nancy at the Whitney Place in Westborough, Massachusetts. She passed in her sleep, shortly after being visited by or speaking with her daughters, sons, sister and grandchildren.

Eileen was born to Anna Rose Costello, nee Curley, and Thomas Patrick Costello in Wayland, Massachusetts on May 2, 1933. She was a graduate of Wayland High School in 1951, where she was class treasurer and was actively involved in dance, drama, and cheer leading. It was there that she met her beloved, Arthur, with whom she was married for 55 years until his death in 2010. She was also a graduate of Framingham State Teacher’s College in 1955.

After meeting with Eileen, one would have been left with an image of a diminutive figure of Irish descent wearing a high white collar. Indeed, Eileen was a modest woman who taught elementary school in Northborough for over thirty years. However, to those who really knew her, she was a world traveler who leaped out of an airplane to sky dive in her eighties. She rafted down the Colorado River, went on safari in Kenya, walked the Great Wall of China and visited the temples in Egypt. But her earthly heaven was at home enjoying a sunny day with her flowers and garden.

Eileen is survived by her daughters, Nancy McKinley and her husband John and Ruth Heffernan and her husband Lee. She also leaves her sons Stephen Tupper and his wife Suzanna and Wayne Tupper and his wife Sherry. She leaves her grandchildren, Patrick and his wife Kerry, Casey, David, Brian, Caitlin, Lucas, Neil, Noah and Christopher. She has two great grandchildren, Kellen and Maeve. Eileen is also survived by her sister and close confidant, Sister Mary Costello OP of the Dominican Sisters in Kentucky.

Relatives and friends are cordially invited to attend visiting hours at the Chiampa Funeral Home, 5 Church Road, On the Common, Shrewsbury, on Friday, September 23, 2022, from 4:00 – 7:00 PM. Her Funeral will be held on Saturday, September 24, 2022, at 11:00 AM at St. Rose of Lima Church, 244 West Main Street, Northborough. Interment will follow at Howard Street Cemetery, Northborough.

In lieu of flowers, donations may be made in Eileen’s honor to the Alzheimer’s Association at act.alz.org or a charity of your choice.