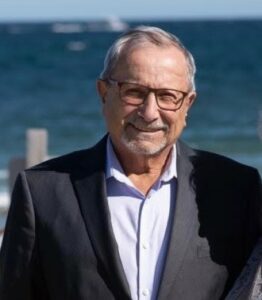 Marlborough – Patricio Marion, 82, of Marlborough died peacefully on Oct. 29th surrounded by his loving family. He was the son of the late Alberto and Corina (Argandoña) Marion. He was predeceased by his brothers Luis Marion and Ives Marion.

Patricio is survived by his wife, Ana Maria, as well as his three sons, Javier Marion and his wife Julie of Newbury, Patrick Marion of Pepperell, and Peter Marion and his wife Brenda of Salisbury, and two daughters, Mary Jo Marion-Farrell and her husband Michael of Milton, and Michelle Klotz and her husband Mark of West Boylston. He is also survived by his 9 grandchildren, his brother Alberto Marion and sister Antonieta Arana of Bolivia.

Born in Valparaiso, Chile in 1940, he was the youngest of 5 children. His life trajectory mirrored the peaks and valleys of Bolivian history. His early childhood was idyllic, a seaside home with horses to ride on the beach. He was the son of a family steeped in the Bolivian mining industry dating back to the early 1800s. His great grandfather, Gregorio Pacheco, was a self-made philanthropist who served as President of Bolivia (1884-1888). By the time Patricio came of age, the mines were in decline and the world of economic possibilities that typified his parent’s generation was no longer in reach.

He spent his young adult years in Buenos Aires, Argentina studying journalism and working to make ends meet. Alone for the first time and without the benefit of extended family, Patricio leaned on his work ethic and entrepreneurial skills. These lessons served him well during his eventual migration to the United States.

Upon return to Bolivia, he married Ana Maria Prout Argandoña, the beautiful girl he knew since childhood through family ties. Together they lived a happy life centered on family, work, and an appreciation for simple pleasures. Their love always burned bright, fueled by friendship, respect, and mutual adoration.

At the age of 28, he left Bolivia to forge a new life in the United States. Upon arrival to Boston, he was fortunate to be welcomed by Ana Maria’s sister Maria Julia and her husband Hernan Machicado. Their kinship and moral support were essential to the young Marion family’s successful transition to the United States.

He believed in the promise of this country, leaving everything behind to sow seeds of opportunity for future generations. He tirelessly provided for his family, holding two jobs in the early years as he worked his way up in the machine tool industry before launching his own company exporting and servicing machine tools to Latin America and beyond. Through this venture, he and Ana Maria traveled extensively to China, Europe, and throughout Latin America.

A devoted family man, his tool box was a constant companion when visiting family, rarely did he leave without repairing something, so much so that the grandchildren commented, “ask Tata, he can fix anything.” Patricio’s children and grandchildren will remember his gentle yet firm hand. His ability to lift and affirm in times of trouble, making it clear that mistakes and misfortunes do not define people. He led with love and instilled the values of character and resiliency.

He was humble, kind, and unassuming. Escorting a homeless man to the family Thanksgiving dinner, lovingly spoon-feeding sick family members, welcoming and housing dozens of friends and family members just arriving to the USA, and countless other quiet acts of kindness.

Justice was important to Patricio. As a consequence of being raised in a traditional society, he was especially determined to raise independent daughters able to provide for themselves and to pursue happiness on their own terms. A life-long progressive, he valued social justice and had a gift for seeing and relating to all people, especially those on the margins of society. He empathized with those who suffered need and always, always rooted for the underdog, unless of course they were playing against Tom Brady’s Patriots. That was a different story.

Patricio loved the ocean, it seemed to reflect the interior landscape he carried within him, a place of deep and limitless possibilities. A place to take long walks with his grandchildren. Sunsets over the ocean were always a highlight for him and Ana Maria.

He enjoyed trips back to Bolivia.  Never more at peace than when overlooking the river Cachimayo from the balcony of Nucchu, his ancestral home. A part of him always remained in Bolivia, and there was a certain wistfulness about him whenever told stories or recalled memories of the old house. He taught his children to likewise appreciate Nucchu and the deep connections it represented.

An open thinker and avid reader, he relished reading poetry, discussing world events, listening to opera, Pink Floyd and The Talking Heads, or simply sitting around a card table with friends and family.  The children of the family were forever-entertained by his practical jokes and story-telling.

Children were especially close to his heart. He joyfully engaged with all children and had a genuine appreciation of the innocence and beauty of childhood. He intuitively knew how to tease them, make them laugh, nurture them and let them know that they were OK.

Patricio faced ALS with his signature calm and grace. Always the anchor during storms, he comforted loved ones as his sickness progressed. His life and memory are a gift to those left behind.

A funeral Mass will be celebrated on Saturday, November 5, 2022 at 10:00 a.m. at Immaculate Conception Church, 11 Prospect Street, Marlborough, MA 01752. Burial will be private.