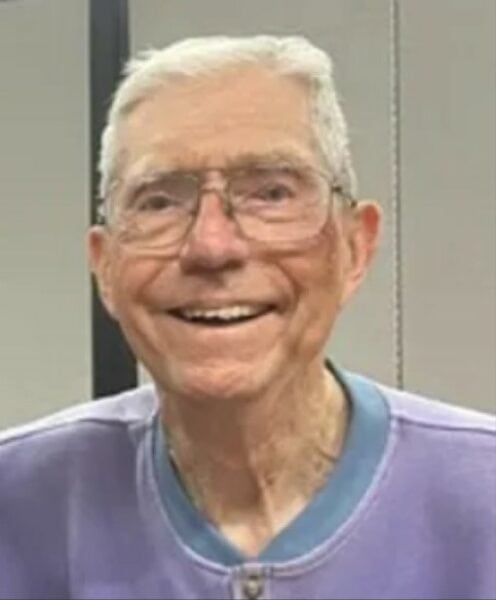 Northborough – Richard “Dick” Boutilier died Saturday, November 26, at the age of 90. His son Craig and daughter Nancy were with him in his last hours. He was the loving husband of the late Janet Kallgren Boutilier, who passed away in 2019.

Dick was born February 6, 1932 in Utica NY, to the late Robert and Ruth (Williams) Boutilier. In high school he moved to Longmeadow, where he played basketball and golf, first for Springfield Classical High, and then at UMass-Amherst. There, he was introduced to the love of his life, Janet Kallgren, by her brother Don.

After graduation, Dick was drafted, and the couple married in the Summer of 1954 at Fort Benning. When Army service ended, they moved to the Worcester area, putting down roots in Northborough in 1957 – and those roots ran deep. Dick gave fully to his career, his town, his church, his family, most of all, to his best friend, inspiration, and wife, Janet.

Dick started at The Paul Revere Life Insurance Company in 1955, where he moved up the ranks of the Claims Department, serving for a time as President of the New England Claims Association. According to Dick “the best professional move I ever made” was giving up his desk job to become a Field Rep in 1980, which conveniently allowed him to schedule his travel to coincide with watching his children’s athletic events. Through company mergers and name changes, Dick remained there full-time until 1992, then served as a part-time mentor of new field reps until 2000.

A gifted athlete himself, Dick played tennis with Janet, ran 10Ks with his children, and played on company basketball and softball teams. Most of all, he excelled in golf, playing into his golden years, routinely shooting his age, and always choosing to walk rather than take a cart.

Dick always encouraged Janet’s adventures, and she brought out his playful side. He showcased his amateur magician skills at birthday parties, and his “magic” top hat came in handy when Janet dressed him up as Uncle Sam to deliver the keynote at the annual Sunset Drive 4th of July celebration. Dick and Janet celebrated their 25th wedding anniversary together by walking from Northborough to The Cape. And because Janet couldn’t resist a “happening,” Dick suited up in period costume to join her at Waltham’s Steampunk Festival in 2013.

Dick was best known for his kindness, integrity, and generosity. He made a big difference in quiet ways, an unsung hero lending his hand and his resources to those in need. He was a great listener, and his attentive, caring way made people feel seen and affirmed. Dick penned private letters of support and gratitude to those whose actions he admired, letters of protest when he saw injustice, and Letters to the Editor that appeared in local and national publications, including one in Sports Illustrated pointing out sexism in their sports coverage.

In Northborough, he served on several Town committees, umpired Lassie League softball, and fostered the growth of pickleball. He was particularly proud of helping to found Northcourt Swim & Tennis Association. At First Parish Unitarian Universalist, he took part in service projects, committee work, covenant groups, and social justice outreach, as well as being the grill-master at the Memorial Day Fair and the lawn mower for years. When Dick discovered a love of poetry, he began memorizing Emily Dickinson poems, and for fifteen years he led a monthly poetry discussion group that is still going strong at the UU church.

Dick’s gentle spirit and good humor will be missed by all who knew him—whether they golfed with him at Juniper Hill, played tennis at Northcourt, shared poetry or just received some kindness from him. He leaves friends and family including his children, Craig and Nancy (Christa Champion) Boutilier, Fran & Ken Preston, Diane (Kallgren) Dillman, Brian, Andrew & Bill Kallgren and their families; Jason & Kate, Jarred, Sara Riel & Yeardley Grimshaw. Dick was predeceased by his wife Janet, his parents, his sister Lois Ann, his brother Robert, and Craig’s fiancée Janet Riel.

A celebration of Dick’s life will be held at First Parish Northboro on Saturday, January 14, 2023, at 11:00 a.m. with a light luncheon to follow. There are no calling hours.

In lieu of flowers, donations may be made to “First Parish Northboro UU” or to a charity of your choice.