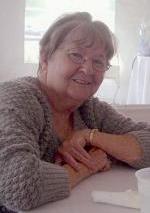 Bolton – Dorothy L. (Geary) Anderson, 73, a longtime resident of Bolton, died at her residence Sunday, April 29, 2012, surrounded by her loving family. She was the beloved wife of 45 years of the late Edward Anderson Sr., who died in 2002.

Born in Leominster and raised in Bolton, daughter of the late James and Mary (Noreau) Geary, she attended local schools and was a 1957 graduate of Hudson High School.

Mrs. Anderson spent many years as a moderator with RFK of Lancaster, a youth program. She also spent several years working for the International Golf Course in Bolton and the Residence Inn in Marlborough. She was an avid Red Sox and NASCAR fan and enjoyed the television shows American Idol, Amazing Race, and Survivor series.

She cherished the times she spent with her family and looked forward to the times she shared with her friends, especially at the Peppermill Restaurant in Clinton. She enjoyed reading her favorite books in her spare time.

She is survived by her four children, Edward Anderson Jr. and his wife, Nancy, of Berlin; Dorothy McNamara and her husband, Bill, of Bolton; Douglas Anderson of Gardner; and Donna Doyon of Biddeford, Maine. She is also survived by her three sisters, Mary Aveni and husband Don of Leominster, Anna Duffy of Berlin, and Patricia Anderson and husband Glen of Del Rio, Texas; nine grandchildren, April, Karen, Sarah, Christina, Bonny, Tim, Jackie, Kimberly, and Beth; three great-grandchildren, Cameron, Anthony and Ryan; and many nieces and nephews. She was the grandmother of the late Sean Doyon, sister of the late James Geary of Bolton, and step-daughter of the late Helen Reynolds-Geary.

Family and friends may attend calling hours Saturday, May 5, from 10 a.m. to 12 p.m., at the Tighe-Hamilton Funeral Home, 50 Central St., Hudson, followed by funeral service at 12 p.m. in the funeral home. Burial will follow in South Cemetery of Bolton.

In lieu of flowers, memorial donations may be made to the American Cancer Society, 30 Speen St., Framingham, MA 01701.