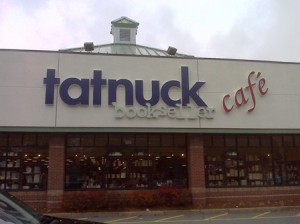 Westborough – Tatnuck Bookseller and Café will be hosting the following events Saturday, Dec. 13 and Sunday, Dec. 14:

Saturday, Dec. 13, 1-3 p.m. – Author Kimberly Gatto will sign copies of her book, “Sandsablaze: Grand Prix Greatness from Harrisburg to the Olympics.” The book tells the story of the thoroughbred horse “Sandsablaze,” who made history in the 1970s, achieving numerous victories with his young owner and rider, William “Buddy” Brown of New York.

Saturday, Dec. 13, 10 a.m. to 12 p.m. – Author Gretchen Detora, will be signing copies of her book “Dave and Danny Pay It Forward.” In the story, a fictional character named Dave shows his young son Danny what it means to give back to others through examples of kindness and “paying it forward.”

Sunday, Dec. 14, 11 a.m. to 12 p.m . – Children’s author Joan Robb will be hosting a story time featuring her book “Kugelicious: If I Only Had a Sukkah!” In this tale, a magical pied piper of puddings, leads an entire village to the home of Sadie Goldberg during the harvest festival of Sukkot. A craft activity will follow the story time.

Sunday, Dec. 14, 1-3 p.m. – Children’s author David Hickson be signing copies of his new book, “Oliver Fae, the Dragon’s Tale.” In this fun, rhyming, colorful book, Oliver sets off to take on the biggest enemy he has ever faced, but soon realizes that things aren’t what they seem. By the end of the story, Oliver will have gained the love and respect of everyone in the kingdom.

Sunday, Dec. 14, 4-5:30 p.m. – Harpist Rebecca Swett will be performing. Swett’s career experiences include performances with the orchestra for the Steve Lawrence and Eydie Gorme concert held at the Brevard King Center for Performing Arts in Melbourne, the Russian Symphony Orchestra at the Kravis Center for Performing Arts in Palm Beach, Fla. and the exclusive Admiral’s Cove Resort in Jupiter, Fla.