By Adway B. Wadekar, Contributing Writer

Westborough – Young children recently attended a fun cultural event, “Explore India,” at the Westborough Public Library, hosted by Kulture Khazana. The event, which was free, consisted of many different activities to introduce the culture of India to participants. Geared towards children of elementary school age or younger, activities included listening to a book being read, as well as engaging in song and dance.

To start off, each participant received a colorful scarf. Then, they all sat in a circle and listened to a song about India. The song taught the children four different ways to say “Namaste”, a common greeting in India. During the song, participants joined hands, and learned how to bow their heads as a form of respect in the Indian culture. The next activity was a short story about the Indian festival, Holi. A spring festival, Holi marks the marking the end of winter and the beginning of spring. It also celebrates the victory of “good” over “evil”. The children learned that Holi is one of the oldest festivals in India and is celebrated according to the lunar calendar. The Holi celebrations begin with a bonfire around which people dance throughout the night. The next morning, participants in the celebration play with colored powders, called gulal. People in India, during Holi, enjoy putting the gulal on one another. Sometimes, they even mix the gulal with water, and play with it using water guns and water balloons. The young children also learned about the typical snacks that are enjoyed in India during Holi. Specifically, sweet snacks like gujiya and malpua, as well as kachori, that is savory, are particularly enjoyed in India during Holi.

Perhaps the most exciting activity for the participants in this event was learning a style of Indian dance called Bhangra. A popular form of Indian dance, Bhangra originated in the Punjab region of India in the 1940s. It’s a group activity, consisting of performing highly energetic moves to fast-paced music. The kids learned typical moves that are performed during the Bhangra, and even the parents joined the fun! After the dancing, the kids tried on typical Indian clothing and received a bookmark with the Indian holiday calendar on the back. The children, and their parents, went home having learned about multiple facets of Indian culture, including dance, food, and holidays. 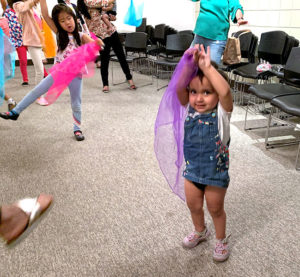