Northborough – Public Works Departments are very busy places this time of year and Northborough’s is no exception. Scott Charpentier, the department’s director, recently said that construction season is typically short but was particularly impacted this spring because of the rain.

He shared that his top three projects for the summer are the Town Common at 39 and 45 West Main Street, the Rice Avenue culvert replacement project, and repaving Green Street.

Charpentier noted that the Town Common project is important because it will help shape the downtown. It is currently under construction by Busy Bee Nursery & Landscape Construction, located in Holden, Mass.

Amy Poretsky, member of the Northborough Planning Board and Town Common Committee, expects that the common will be finished in the fall. A formal dedication is being planned which will be announced closer to completion.

She noted that because the grass will be planted in the fall the Applefest Farmers Market will be relocated. The Applefest Committee will announce details on that decision soon.

The second top project is the replacement of the Rice Avenue culvert. For years, the late Howie Stone, whose property borders the culvert, had asked the town to replace it. During a public hearing held last fall, town officials said the project would be done this summer. (Stone passed away in March.)

Charpentier explained in this case that when water runs through galvanized pipe, the sediment in the water strips the pipe leaving it to rust. Once that happens, the soil surrounding the pipe falls and water, having nowhere else to go will wreak havoc with nearby roadways and land structures.

“The goal is to get to the pipes before they fall,” said Charpentier.  “It put a spotlight on culverts in Northborough. People across the community are now aware that the culverts are in tough shape, they are expensive to replace and they take a long time.”

This project is being funded through the Town’s Capital Improvement. 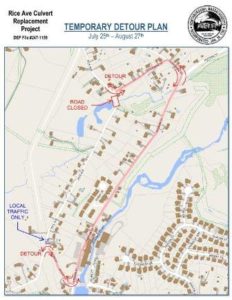 The process began when Charpentier put together a culvert inventory (there are 75 in Northborough) that details their conditions. He then obtained the requisite environmental permitting and then communicated with neighbors of the culvert to notify them of what’s to be done. The process is lengthy and took roughly three years before being funded at the Annual Town Meeting.

Relevant to paving, which is in full swing, Charpentier said that Northborough is trying something new – hot in-place asphalt recycling has been added to the town’s pavement management program.

The full length of Green Street from the intersection of Howard Street to the Berlin town line is currently being repaved using this process. It’s a challenging street because there aren’t many alternative roads in that area.

Mailers have been sent to residents letting them know what is happening and the paving timeline. Charpentier expects it should be wrapped up in time for school bus traffic in late August.

“It’s a process that has been used in a lot of communities for a number of years,” he said. “It takes the existing asphalt that is all cracked and falling apart, rejuvenates it with new liquid asphalt which is the glue, then re-compacts it so that the old asphalt serves as a support for another surface treatment. We are going to use rubberized chip seal.”