Shrewsbury – Shrewsbury Town Planner Bernard Cahill met with the Shrewsbury Town Center Association (STCA) Feb. 13. He has been making the rounds to various stakeholders in downtown to talk about rezoning to make the center a more vibrant place.

The rezoning process comes at a time when the town will be disposing of the former Beal School property at 1 Maple Ave. as the new elementary school will open at 214 Lake Ave. in the fall of 2021. The timing is in concert with the work of the Horsley Witten Group who has been contracted by the town to guide the Request for Proposal (RFP) process for redevelopment of that site. 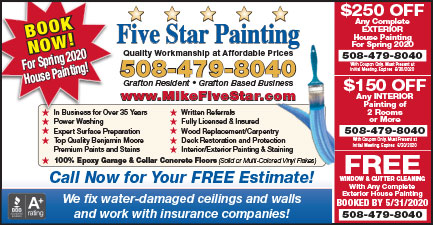 His presentation included rough draft language of what the rezoning bylaw will be when presented at the Annual Town Meeting beginning on Monday, May 18. The purpose of the presentation was to gather feedback from the STCA.

Improving the town center is not a new concept and is a charge contained within the town’s 2016 Master Plan which predates Cahill’s tenure as town planner.

Consultants from the Horsley Witten group have taken the elements and goals from the Master Plan and have fleshed them out. Recommendations included obtaining public comment and feedback from the public forums which were held at the Shrewsbury Public Library last fall.

Cahill noted that most of the feedback was positive but the biggest concern was that it wasn’t going to happen.

“We didn’t see any surprises; people really liked the idea of larger sidewalks, slightly taller buildings and so forth,” he continued.

The six primary areas of focus for rezoning include boundaries, variety of uses, lighting and signage, architectural design, frontage and landscaping, and parking.

Cahill shared an aerial map of the current town center boundaries which included an overlay of expanded boundaries.

Cahill emphasized that the new zoning would only impact new development in the town center and owners of existing building would not be forced to comply, but that new zoning does provide existing and future owners with new and creative possibilities.

“As citizens and as stakeholders, conversations like this that are informal are a way people get educated on the process,” remarked Maribeth Lynch, STCA chair.

Cahill said that he hopes to have the final draft of the bylaw for the Planning Board’s next meeting Thursday, March 5, at 7 p.m. at Town Hall, 100 Maple Ave.