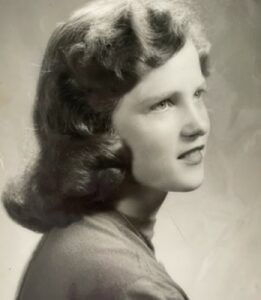 Grafton – Grace E. (Wells) Atchue passed away gently in her sleep on July 26, 2021 after a long battle with Alzheimer’s disease.

She leaves her loving husband of 64 years, Charles L. Atchue Sr. of Grafton; her children, Charles L. Atchue Jr. of Shrewsbury, Pamela D. (Atchue) Therrien and her husband Raymond Therrien of Sutton, her son Richard A. Atchue and his wife Nora of Sutton, her son John P. Atchue of Grafton; and nine grandchildren. She was predeceased by her mother, Helen G. (Tetley) Wells; her father, Ralph Wells; and eight siblings.

She was born in Worcester on January 14, 1938 and grew up in Oakham, where her mother raised the nine children while working as a nurse at Worcester State Hospital. Money was in short supply, but fun and adventure were not.

“We had to use our imaginations,” she often said, “but we always found a way to keep ourselves occupied.” Much of this entertainment was found outside in the extensive woods abutting their family home and at Lake Dean in town.

“We’d swim the day away until we were famished, and then eat poor Grandma out of house and home when we got back,” she would recall, always with a smile. Though this early life was financially spare, overcoming it on a daily basis shaped her appreciation of all things outside of the material world. Her love of the outdoors never left her, as witnessed by her lifelong joy of gardening, her love for all birds, and the reliable pleasure of a long walk.

She met our father, Charlie, one evening while she was waitressing at the Westborough Diner and he had finished second shift at Wyman Gordon.

“He was handsome, sure, but he was so funny,” she would say when asked about how they met. (To help you understand the attraction, our father’s funny bone springs from keen observation of human nature, peppered with toilet humor. It’s solid gold.) The spell was cast, and they were married on June 8, 1957.

In May of 1968, Grace and Charlie, along with their four children, moved into the new home they built and would stay in until 2005. We children were the lucky recipients of a mother who was an excellent cook, a meticulous housekeeper, a dependable source of sound advice, and a talented seamstress who could make clothes and Halloween costumes from scratch (or from a Simplicity pattern purchased at The Mart). It was through these daily efforts, both great and small, that she consistently demonstrated her love for us, the same love she would later shower on her nine grandchildren. In 1977 she earned her real estate license and was a consistent and well respected agent for 24 years, earning a reputation for her solid work ethic and dedication to the real estate community.

Upon retirement, they made their new home in Florida at a golf course subdivision in Lake Wales for the next 19 years. It was there they found another level of happiness in the constant summer sunshine. New friends were made, and Mom and Dad got to expand their love for golf, even to the point where Mom – on two separate occasions – scored a hole-in-one at Ashton Club.

From the greens, they would return home to their house nestled at the edge of a small lake where an enormous weeping willow tree directly across the water would rustle its fronds in the evening Florida breeze. Dad made sure that Mom got one last winter in this beautiful setting before she was brought home by our brother, Rick and his wife Nora, where she would spend the remainder of her days surrounded by her family who were blessed with the privilege of caring for her.

Grace’s last years were significantly extended – both in quantity and quality – through the constant love and support of our father, Charlie, who never complained when his role as husband expanded into that of caregiver. Special thanks are owed to our sister, Pamela, who, over the course of four years, navigated so much of the medical landscape Mom had to get through Her commitment to precise record keeping and her attention to the subtle changes in Mom’s condition kept Mom’s health as steady as it could be. Special thanks to our sister-in-law, Nora, who gave so generously of her time to keep Mom clean and comfortable. She, along with our brother, Rick, opened up their home so that Mom had a beautiful and familiar place in which to spend her last months. And, a debt of gratitude and thanks to the spectacular hospice nurses, Lori Hughes, Becky Forcier, and Pam Albee, who guided us through all the challenges of hospice care with professionalism and genuine kindness.

Grace’s legacy lives on in the hearts of her husband, her children, her grandchildren, and all those whose lives were enriched by knowing this unassuming, gentle, loving woman with the sparkling blue eyes and the generous nature. We love you, Mom, and we’ll see you again.