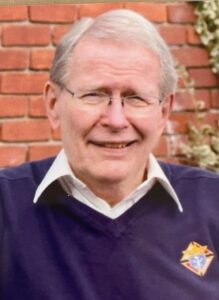 Shrewsbury – David M. Cox, 79, of Shrewsbury, formerly of Westborough, passed away peacefully on Friday, July 1, 2022 at Christopher House of Worcester. He was the beloved husband of Jacqueline M. (Spencer) Cox.

Dave led a life full of service making an impact on youth, colleagues, family & the many friends he made along the way, who will miss him dearly.

Born in Albany, NY, he was the son of the late Lorton and Catherine (Farley) Cox. He was a graduate of St. John’s Academy in Rensselaer, NY. Dave’s faith and love of sports were evident early as he played basketball & baseball in youth leagues and for St. John’s where he met, Jackie. They married 59 years ago and moved to central Mass where they settled to raise their family. Dave spent 30 years at UPS making lifelong friends.

In addition to his wife, he is survived by two sons, Michael Cox and his wife Betty of Hubbardston and Dennis Cox and his fiancé Tracy of Worcester; grandsons, Matthew Cox and Mick Lemere and beloved great grand-children, nieces and nephews.

Dave began to umpire at age 18, which led to a long career in both Massachusetts and New York including Little League, high school & college level ball. He was recognized for over 50+ years of umpiring by Massachusetts District 5 Little League. He was also active as a referee in both youth & high school level basketball and K of C Free Throw events for many years.

Dave’s other passion was his involvement with the Knights of Columbus beginning at the John Boyle O’Reilly Council #85 in Westboro in 1974. He became active locally working his way up to Grand Knight then expanded his involvement at the regional & state level holding multiple offices including District Deputy. Dave was an active, Fourth-Degree member of the McSweeney Assembly. He also served as Grand Knight and District Deputy for Council #194 in Glens Falls, NY, where he and Jackie retired and spent several years close to her sister Pat, Walter, Emily & Chris Cisek before returning to Mass.

His funeral Mass will be celebrated on Tuesday, July 12, at 10:00 A.M. in St. Anne’s Church, 130 Boston Turnpike, Shrewsbury. Burial will be private.

Members of Council 85 will conduct a prayer service at 6:45 P.M.

In lieu of flowers, donations in his memory may be made to Jewish Home Hospice, 646 Salisbury St. Worcester, MA 01609 on online Make A Donation – Jewish Healthcare Center (jhccenter.org).